Member Sign In
👤  🧘‍♀️  📆  🏠  👨‍⚖️
HistoryWe are looking forward to a wonderful summer! We hope you continue to make our neighborhood pool a destination – a place to gather, a place to play, and a place to meet friends.
The history of the pool below describes a cycle of ups and downs across several decades. However, in 2010 the board leadership restructured the pool management into a mutual benefit non-profit organization. Truly a rebirth, the Edgewood Pool and Community Center is now a vibrant and financially stable organization. Together with you, we are creating an anchor in our neighborhood that serves our members and community. 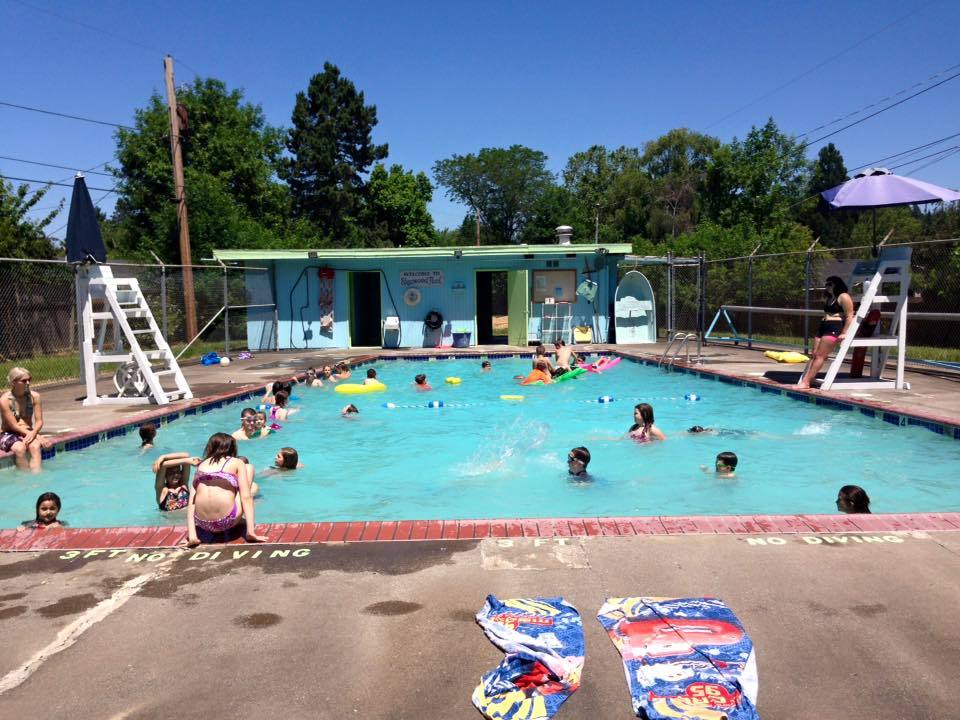 In recent years, we’ve made these improvements:

Other investments:  We also have a new pool pump!

The Edgewood Pool was built in the early 1960’s by Breeden Brothers Construction as a part of their Edgewood development in South Eugene.  It was run by the Edgewood Homeowners Association, consisting of a Board of Directors elected annually by the membership. Membership was initially a part of the covenant signed when buying a home in the development, and annual dues were expected of all – even homeowners who never used the pool.  As the development grew, the same 44,000 gallon pool was expected to serve 1,200 eligible swimmers but only had the capacity for 50-55 swimmers at a time.  Looking through 1966 meeting minutes, Mr. Breeden planned on expanding the pool facilities with a lap pool and possibly a wading pool  to accommodate growth.

However, there was a financial crisis the following year due to unpaid memberships (up to 25% of members weren’t paying dues) which resulted in an accounts-receivable that was several times the operating budget.  Further, there were problems with maintaining adequate chemical levels to assure clean water and with the “quality of supervision and guarding” that season (1967) and the “present lifeguards and instructors [were] discharged immediately”. The 1968 season was in doubt- would the pool open?

Sadly, it didn’t.  It was 1973 before the community got together to scrub the sad green pool clean and get it going again.  Chief among those lending a hand and running the facilities was Tom Kessler, a long time EHA Board Director. His son Chad Kessler is a former Board Member and volunteers extensively in maintenance of our lovely park like setting.

The financial and logistic challenges of running a seasonal recreation facility have had similar themes over the years.

Reviewing minutes from any decade show that having appropriate supervision of the pool facilities (water quality/ chemicals) and of the human resources (guards/instructors) is key to success.  These functions have been long held by volunteers and there can be occasional problems with consistency, accountability and professionalism.  The finances of the pool have always been marginal and there are numerous references in the archive about being years delinquent on property or other taxes.  While there is reference to the Board paying a Treasurer in 1967 ($60/month!) this too has been a volunteer position for some time.

Despite the perils of running a volunteer organization and the financial pitfalls that the pool has negotiated, the Edgewood Pool has always been a popular place with residents in the neighborhood.  Until the City of Eugene opened the Amazon Pool complex, the Edgewood Pool had waiting lists every summer.  Since the larger pool opened, Edgewood has struggled to achieve membership targets, but due to the enormous volunteer support (grounds, operations, membership, life guard manager), we are able to keep the pool open each summer for the approximately 130 families that sign up annually.

The Edgewood Homeowners Association was replaced by the Edgewood Pool & Community Center in February, 2010.   This reflects our re-birth as a mutual benefit non-profit corporation after the pool closures ending our 2009 season.   The circumstances are remarkably similar to the closures in 1967, however, this time we changed Board leadership and didn’t “immediately” discharge the guards!  The new leadership was interested in pursuing a sustainability model that included formalization of our tax status.  The pool has long been functioning as a corporation that benefits only the community and has never, as far as the archives reveal, made a profit.   The Board also feels that the new name reflects our goal of increasing the use of our park to include more community with what we hope will be a robust gardening and composting program and, one day, an improved facility that would include meeting space for community and other non-profit groups.

The EP & CC also plans on becoming a community model for energy conservation with an eye toward decreasing energy costs with passive heating and more efficient equipment.

Find out more about this Sponsor

Be one of the first sponsors on our new website. Great for local restaurants, real estate agents, brokers, dentists, etc. YOUR target market is here! Show you give back!

Are you a local business or service looking to sponsor our swim team?
Get recognized in our community by appearing on our website and apps!